Every now and again a title get’s announced and I immediately think “This could be a good one for my daughter and me to play together!” That is exactly what happened when I saw the first trailer for The Swords of Ditto. My daughter is still only 8 so most video games are too complicated or challenging for her. She’s still in the phase where she loves video games mainly because she knows I do. Therefore, I’m constantly on the look out for games that might be her first “love”. Knowing her, I may have found it.

The Swords of Ditto looks like the perfect game for the younger gamers among us. I want to use it as an example to illustrate what I’m looking for when I’m deciding to get a game for the family or not.

Before I knew anything else about The Swords of Ditto, I knew I loved the way it looked. It’s a simple, hand drawn aesthetic that is easy on the eyes and not to mention adorable. Thick black lines and solid colors make up this world and it’s incredibly pleasing to look at. Of all the videos I’ve seen I haven’t once felt like the visuals were too harsh or sharp. It’s perfect for young eyes and just a joy to look at. 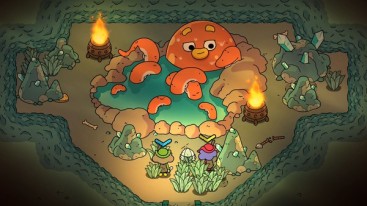 I always want to make sure the characters in the games my daughter plays are in some way relatable. Not only are the playable characters children from the local town, I also fell in love with the characters we’ll be meeting along the way. I mean, a chill octopus and wise old cat? My daughter is going to LOVE these guys.

It also takes place in a pseudo modern world. So the kids in town have smart phones and eat cheeseburgers. This is easier for her to wrap her brain around than high fantasy settings and will allow for easier immersion.

With youth comes a short attention span so I always want to see how long it will take to play a game session, or at least – how often can we save? The Swords of Ditto is a self described “compact action RPG” which is exactly what I’m usually looking for if it’s a game I’m getting for the both of us. I want to be able to either finish a level / game within the first session, or be able to save at a good spot to be picked up at a later time. I don’t want her to feel at any point like she’s slogging on and has another 20 hours ahead of her to get to the pay off. I think that’s fine for adults but it can easily overwhelm children and make them not want to play. It’s too daunting.

The developers over at onebitbeyond have said that instead of investing 30 to 100 hours in a single story, they want to be able to allow players to experience different stories a lot more often. This is music to my ears. I have a great time playing games like The Witcher 3, but I certainly can’t sit down with my 8 year old and say “Hey Honey, watch this!” She’d be terrified or bored within 15 minutes. The Co-op option of this game is perfect, no split screen, easy set up. I mean, the revive mechanic is a hug! So cute.

This is where the real design genius of The Swords of Ditto comes in. Challenge and disappointment are hard enough for adults while gaming, let alone 2nd graders, so finding the proper way to challenge kids without punishing them too much for failing is key. They nail it with this title.

When you die, the game is over, yes, however, that is where the story of the next character begins! Each adventure is tied to the last, win or lose. Every time you start a new game, a new world is procedurally generated and set at time 100 years in the future. If your character died, evil won! It’s up to your new character to save the day!

You do lose items collected when you die, but you never lose experience which is great. That way, if the game is just too challenging for your little ones, they will eventually just out-level the content they are getting stuck on and be able to move on. This way younger players always have a sense of accomplishment win or lose and they’ll want to come back for more.

I’m really looking forward to this game. I should mention we do have a while to wait. It’s not launching until early 2018, but as a dad who loves ARPGs and fantasy gaming, I’ve always been on the lookout for the game that could introduce my daughter to the genre in the right way and would allow us to just have a ton of fun. I think I found it.