TL;DR: Learn what’s out there and figure out what you want.

Broadly speaking, there are 3 major types of games:

— where the goal or mechanisms of the game are focused on attacking your opponent directly.  You win if they lose.

If you have a penchant for competition, like to battle wits, like to get a little rough, and don’t pull your punches — you’ll probably enjoy this kind of game.  I’m using the term conflict a little broadly to include abstract games, player elimination games, fighting games, or strategy games with a real emphasis on direct player interaction.  Usually when you “interact” in a board game, it’s to your benefit and to your opponents detriment.   Not always, but often.

— where you each work on your own puzzle and player interaction is lessened.  You win if you perform better.

Each player can solve the puzzle in their own way.  You interact by observing your opponent’s needs and blocking them on the common board, sabotaging their carefully laid plans.  You don’t have to play this way, but it’s one example of how you can play cutthroat.  Alternatively, you can just make whatever your optimal moves are without paying attention to your opponents’ player boards.  Some games prevent any common board interaction.  Some games encourage it.  Some game force it to happen more often.  You can dial the meanness up or down, but in general, these types of games have less direct confrontation than pure conflict games.

— where you all work together as a team against the game itself.  You all win if you collectively beat the game.

This is an overly generalized grouping.  There are so many flavors of board game experiences out there that it’s hard to quantify them.  Here’s a quick sampling of what’s out there:

Some people like to throw down fisticuffs.  Some want to play in their own sandbox.  And some want to work together as a team.  Find out what kind of people you are and have fun along the way.  We’ve dabbled in all three of these broad groupings, and I suggest you do as well. You won’t know what you prefer until you try them.

What themes piqué your interest?  What themes do you tend to avoid?  An engaging and interesting theme can pull you in, get you invested in your character, and give purpose to your actions and decisions within the game.  You’ll often hear about games that are “dripping with theme” or where the theme is “pasted on.”  The former being a well-integrated theme where the mechanisms are woven into the thematic context.  The latter being a purely mechanical activity where the theme could be anything else and the game would still function just as well.

You can decide for yourselves, but here’s my take on it.  I’ve played 78 or so modern board games.  Most of the games I’ve gotten rid of (or tried to get rid of) have pasted-on themes, despite being very highly regarded games.  Almost every game that remains in my collection has a very rich and well-integrated theme.  So for my money, theme is a big deal.

Pro Tip: You can filter all the board games on BGG by theme (and then sort by rank).  Pick a theme that sounds interesting and see what games are out there.  The BGG Rank isn’t gospel, but it’s as good a place to start as any.

Mechanisms are the levers and switches the game makes you interact with during your play.  I’ll go into more detail about these things later.  Just know that a wide variety and combinations of game mechanisms are out there.  If you find a string of games you don’t enjoy and they all share a similar mechanism, it might mean you just don’t care for that particular mechanism, which helps you filter out which games to avoid buying in the future.  Developing some board gaming vocabulary, and your personal preferences, can help you find good games more often. 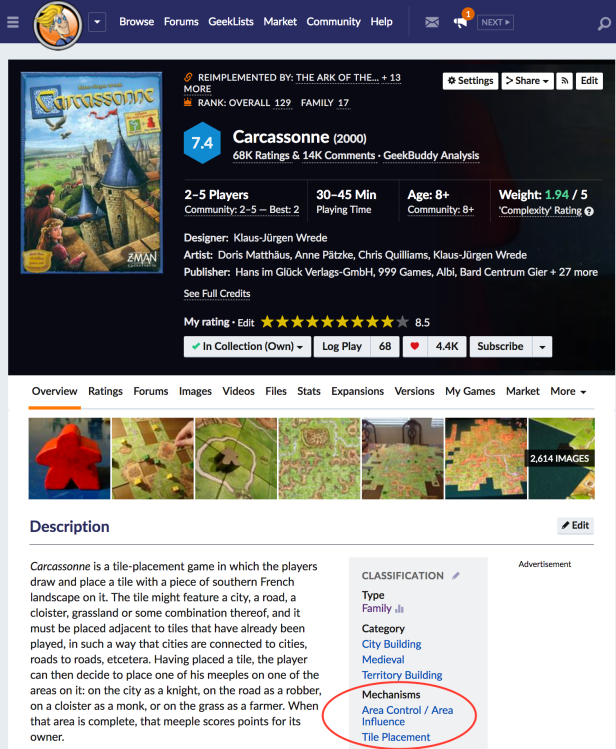 How much time do you have to play?  A game must not overstay its welcome.  A game should pack a good punch for the amount of time it takes to play.  There’s no rating for whether a game plays fast enough for the amount of entertainment it delivers.  You’ll just have to get a feel for this.  But generally speaking, if you only have a 30 minute lunch break in which to play games with a coworker (for example), don’t buy the game with the 3 hour play time.  🙂

Pro Tip: You can find the play duration on the side of the box, …or on BoardGameGeek.  Some games are starting to give an additional duration for number of minutes per player, as the game will take longer with more players taking time to think on their turns.

The weight of a game is a hard statistic to explain.  I tend to think of it like this:

How complicated are the rules?  How many niche cases are there?  How often do I have to consult the rulebook during play?  How fussy is the gameplay?  How many steps and phases and turns and subroutines do I have to go through in order to perform my action?  The more cognitive load the game demands, the heavier it feels.  It becomes harder to enter into a state of flow where you perform at your peak ability.  Games like this are a tough nut to crack.  Games like this are heavy.

Pro Tip:  You guessed it!  You can find a general weight rating for any given game on BoardGameGeek.  This rating is based on thousands of people giving their opinion of a games weight on a scale of 1 to 5 (with 5 being the heaviest).

Whether you’re looking to play solo, with your spouse or significant other, or group of friends, you’re going to need a game that fits the right number of people around the table.  More than that, you want a game that performs optimally at whatever player count you’re considering.

A game publisher might advertise on the side of the box that a game can be played with anywhere from 1 to 7 players, but the board gaming community has found that each game has a sweet spot — a player count that it just works best at.

You can play Carcassonne with 5 players, but I would never recommend that.  It plays at its best as a 2p game.  3p is okay, but 2p is best.

The community of several thousands of board gamers has spoken.  That many people offering opinions on so many games creates credibility.  BGG doesn’t get everything right, and their website has a bit of a learning curve, but it’s a tool at your disposal.  I use it quite often to help me filter out games to try and games to avoid.

This is mostly for parents to consider.  I’ve been thinking a lot about this lately as my eldest son is just about to turn 5 and I think he’s ready to level up a bit into more complicated games.  Publishers put a minimum age on the box.  I think it’s usually based on choking hazards and there must be a certain age at which kids tend to know not to put things in their mouth anymore.  But the board gaming community puts in their own two cents.

So a box might say Ages 8+, but the community says a 6-year-old can handle this game just fine.  My 4.5-year-old son is right on the cusp of being able to play some deeper games, but for now we’re building a solid foundation of “how to play games” in general, by sticking with games designed for kids his age.

No kid is the same.  They all develop at different rates.  My kid might not be ready, but yours might.  You won’t know until you test the waters.  I’m using the community’s recommended minimum age as a guide. 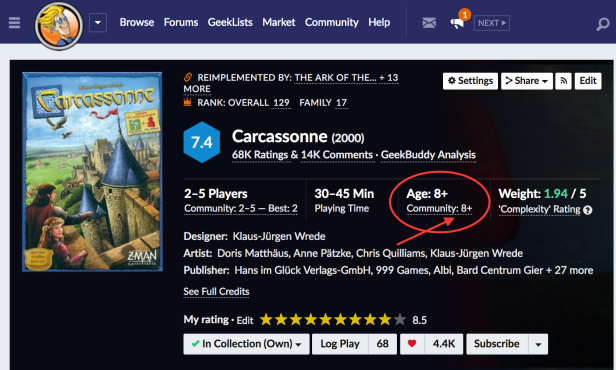 The Internet is truly awesome.  Gone are the days where you walk into your friendly local game store and only have the back of the box and the store clerk’s opinion to go on before deciding whether to buy a game.  There are so many people out there reviewing, writing about, podcasting about, and creating videos about board games.

So before you pull out your credit card, head on over to BGG and pull up the game you’re interested in.  Hit the Videos link and watch one or two of the game reviews.  They’ll give you a brief overview of the rules of the game, what it’s like to play, and a review of what they thought about it.   They don’t always agree with each other, so watch a few of them.  That should give you a solid idea of what the games strengths and weaknesses are and whether or not it fits the niche you’re looking to fill.  If you really get into the hobby, you’ll learn the preferences of each reviewer and whether or not you tend to agree with them.

Stop for a second and really try to imagine when you will play this game.  How often?  Who will play it with you?  How likely are those scenarios?

Don’t just imagine the best case scenario where all of your friends know the game like the back of their hand, they’re all playing at peak skill level and everybody is having a blast.  Wow, what a great time you’re all having!

That situation requires lots of dedication from multiple people who have full life schedules of their own.  It usually takes a few plays of a game to understand all the rules.  Does your group get together often enough to remember the rules between each game night?  Is your group focused on a single game or do they like to switch around and try new games all the time?  How much of the time is this game just going to sit on a shelf, not getting played?

Be realistic with yourself.  Find games that carry a high likelihood of getting played.

Owning 365 games and thinking you’re going to play them all in a single year means that gaming takes up a lot more of your life than it does mine.  Personally, I can’t justify owning all of those games.  I own 44 games and have 12 I want to play but can’t seem to get to the table.  What good is a game that doesn’t get played?

Resist the temptation of the imaginary ideal game day!  It’s a siren song, pulling you in!

Let me sum up

We seek out games for a variety of reasons.  I try to own games that fit a variety of moods, energy levels, durations, themes and interests.  I don’t always want the same gaming experience and my wife doesn’t always want a 2-hour-long thinkfest.  I game with my young sons, my wife, my brothers, and my friends.  Each group comes with its own preferences and requirements.  The more you delve into the hobby, the more you learn about what your needs and wants are, and how they change as you grow in the hobby.

You could buy one game and play it forever, but you’d be missing out on a lot of fun and unique experiences.  I’m not suggesting you own more games than you can play, but I am recommending you jump in and swim around in the hobby.  It’s really fun!